We’ll send you an email with reset link

A busy, full-service restaurant model with multiple locations, Cafe Crepe was operating their business through a central commissary kitchen. This commissary would receive orders from suppliers, prepare recipes, and then “sell” inventory to each restaurant at no additional cost. They had started the business using a manual pen and paper system to manage inventory, but as the business grew it became apparent they needed better tools.

“Everything was done on paper,” says Lewis Hart, Director of Operations for Cafe Crepe. “It would be a print out sheet. You’d send it to the accountant and they would match the pricing. But to scale up, franchise-wise, we could not do it on a piece of paper anymore.”

Lewis says they tried managing inventory through their existing POS system. Beyond general complaints that the system was – in his words – “clunky” and difficult for staff to use, it also didn’t have the functionality they needed to move and track inventory from the commissary to specific locations. It became very difficult to reconcile theoretical versus actual food costs.

“All that it would show in the commissary kitchen was that you were out of X amount of product,” says Lewis. “We’d have to match up the purchases from the stores and hope that everything lined up. If something wasn’t matched up, we’d be out of a certain amount of products but wouldn’t be able to tell if it was from store one through four – or from the commissary kitchen. That money was lost every month.”

And not just money. It was also time-consuming to identify where discrepancies were coming from when the print outs didn’t match the actuals. Where was the food waste happening? Which locations were following the recipes? “Accounting takes 90 minutes to two hours for a location that carries about $12,000 to $15,000 of product,” he says, regarding their weekly process. “After that, it was taking them about seven to eight hours of troubleshooting.”

And sometimes, they weren’t able to pinpoint the issue. “For example, we’d make batter, three to four buckets a day. If you’re doing four buckets a day, you’re making almost 2,000 liters a month. If you don’t have that in your system already accounted for, and you need to pull out sheets to check if it was entered or not, and if that staff member isn’t available on the phone to answer if they entered it or not – you’re stuck.”

“We chose TouchBistro because we wanted to use a friendly interface,” he says. “We know the age of most of our staff is 17 to 25, so using TouchBistro was a lot more intuitive for them. It made service a lot easier for everyone, especially when you get those headaches of not being able to find a menu item… You can just type it in – like your phone.”

Plus, with TouchBistro’s MarketMan integration, Lewis gets a complete bird’s eye view of the business without needing to physically be at each location. “I can literally pull up my phone or my laptop, and I can be anywhere. It’s very easy for me to now see the information in Hong Kong or in Vancouver,” he says. “I can give the correct guidance on how to fix problems, as opposed to having to do the deep dive on why that might be the case.” 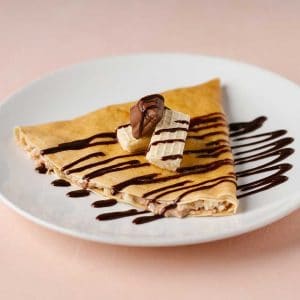 Saving Time And Money as the Business Grows

Now that operations are up and running with TouchBistro and MarketMan, Lewis can step back and see the full impact of the new technology. Like time savings, for one. While accounting takes about the same amount of time as before, troubleshooting went from seven or eight hours per week down to between five and 60 minutes.

“Now, because it’s so easy to integrate everything – like a store’s prep activity, their waste schedule activity, etc. – instead of scrolling through paper waste sheets and trying to cross reference everything, they can just pull up the report and everything is counted in the system,” he says. “If they’re making batter, they have a screen to punch it in right then and there. [For troubleshooting], all they have to look at now is whether the recipes are being made correctly and what was rung into the POS system.”

Lewis says using the new system brought a lot more clarity to his operational efforts and to individual restaurant managers. “Once we switched over to MarketMan, they were no longer asking questions about why inventory was missing, because they knew the answers at that point,” he says. “The use of it is so simple.”

The software also helps Cafe Crepe with vendor management, flagging when prices have gone up or are irregular. “It allows me to jump straight on the phone with the rep and ask why. If there was no valid reason, I expect it to be corrected or credited by the next delivery.”

Another money saving benefit of the new system came on the labor side of the business. “We found that our staff turnover dropped quite a bit in the first 30 days when we switched over to TouchBistro,” Lewis says, recalling how much easier the new system was to train and use everyday, in comparison to Revel. “We generally have high turnover in this industry, which costs about $1,800 to $2,000 worth of resources for every new staff member of minimum wage. So if you’re saving staff members from quitting in the first 30 days because they can’t deal with the interface, then you’ve paid your return on investment.”

When it comes to advice for other restaurateurs looking to improve their inventory management practices, Lewis urges his peers to invest in a system early, one that will make the process easier and free up your time to focus on bringing people into the restaurant itself.

“Restaurants on the best of days make about 15% profit. So if your food cost is going from 30% to 40%, you’re not making money. That comes from suppliers, lack of control, lack of understanding of your product – there are so many moving parts,” he says. “An inventory system that will give you daily alerts will give you a much quicker pathway to understanding where your money is coming from.”